The effects of obesity on human reproduction

The World Health Organization (WHO) defines obesity as an excessive accumulation of fat in the organism.  An individual is considered obese when the body mass index (BMI) is equal to or greater than 30 kg/m having a negative impact on the person´s health.

According to data from 2016 (WHO, 2016), 39% of all adults are overweight and 13% are obese.  In fact, 41 million children under the age of 5 are already overweight, and obesity is now considered an epidemic.

The prevalence of obesity has tripled since 1975 causing more mortality in most countries of the world than malnutrition (WHO, 2016).

This condition increases the risk of suffering cardiovascular diseases, diabetes, musculoskeletal disorders and some cancers, among others.

Effects of obesity on fertility

Infertility is three times higher in obese women (Rich-Edwards et al, 1994), and these women are also more likely to experience failure in the assisted reproduction treatments due to endocrine and metabolic abnormalities (Bellver et al, 2010).

In summary, obese women will have a higher risk of:

Obese men will also show reduced sperm quality, erectile dysfunction and hypogonadism due to endocrine alterations associated with their condition.

Effects of obesity on the descendants

Fetal programming refers to a variation in fetal genome expression induced by hormonal and nutritional changes in the mother that could lead to permanent effects on the physiological and structural functions of the newborn. (Delisle, 2012). Maternal nutrition refers to the nutritional status of the mother before and during pregnancy, being the first and most decisive case in relation to the possible impact on the fetus. (Delisle, 2012). 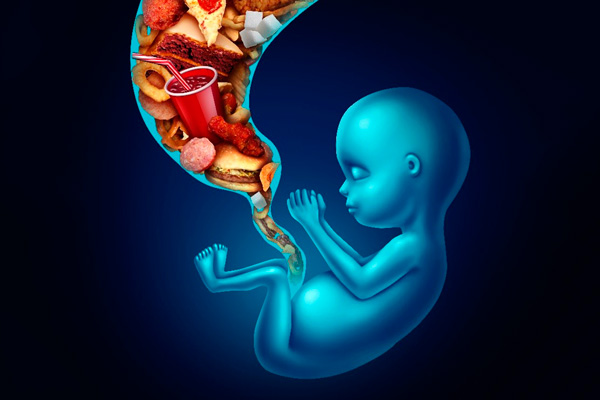 The genes determine the body size, the metabolic competition, and the functional capacity of organisms.  However, these are also influenced by the environment, including the intrauterine environment (Jackson, 2000).

Many studies have shown that obesity before and during pregnancy will generate epigenetic modifications on the embryo's genome that could be responsible for an increased risk or predisposition in the offspring to a series of diseases such as:

What is our role in these cases?

Once the importance of obesity in human health and reproduction has been determined, it is essential that our patients receive appropriate advice. We must always insist on a healthy lifestyle not only during pregnancy, but when seeking it. The metabolic and nutritional status of the patient before becoming pregnant seems to have even more impact than this same status during pregnancy, thereby proving our role as reproductive specialists to be decisive. Ideally, patients should have a normal BMI.

How do we improve the reproductive health of our patients?  Thanks to a lifestyle therapy based on a low-calorie diet, adapted physical exercise and psychological support.

Both medication and bariatric surgery should only be considered as a last resort.

In addition, we must know the appropriate stimulation protocols for these patients, as well as the associated pathologies, know how to treat them and to be able to manage any possible complications in assisted reproduction treatments and during pregnancy.

This is why, at IVI RMA, we insist on complete training to be able to customize each patient's treatments and successfully achieve our ultimate goal, a healthy live newborn.

Would you like to learn more about the role of obesity in Assisted Reproduction?